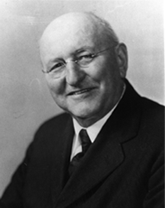 The Reverend Edgar J. Helms, a Methodist minister who developed innovative ways to help his community’s immigrant, jobless and poor citizens, developed the Goodwill concept in the late 1890’s. His church-based “industrial school” in Boston’s south side offered skills training and a fundamental job placement service was developed in 1896. Later, during the Spanish-American War, Helms took a burlap bag and went door-to-door asking his affluent neighbors for clothing and anything else that could be carried away. Impoverished men and women were hired to repair and refurbish the donated materials, which were then sold. The income from the sale of these items was used to pay the worker’s wages. Thus, the original Goodwill Industries method of self-help enterprise was born.

In 1902, a new facility was built under the name Morgan Memorial Cooperative Industries and Stores, Inc. It was not until a group in Brooklyn, New York who adopted Morgan Memorial’s methods of operation that the term “Goodwill Industries” was coined. With Rev. Helms as the driving force, the Goodwill Industries concept spread across the United States. By 1926, Helms was touring the world telling the Goodwill story laying the groundwork for an international movement. Although people with disabilities were never excluded from Goodwill Industries programs, they were not the focus of the organization’s efforts until the mid-1930’s. Goodwill was one of the first organizations to address the long neglected needs of America’s citizens with disabilities.

Today, Goodwill Industries International, Inc. (GII) is a network of 205 community-based, independent nonprofit organizations, making it North America’s largest nonprofit provider of employment and training services. With locations in the United States, Canada and 22 other countries, Goodwill serves people with workplace disadvantages and disabilities by providing job training and employment services, as well as job placement opportunities and post-employment support. Goodwill helps people overcome barriers to employment and become independent, tax-paying members of their communities. While the basic goals of Goodwill have not changed greatly over the years, the types of people served have. Goodwill serves people who face a variety of barriers to employment, including physical or mental disabilities, illiteracy, homelessness, inadequate education and welfare dependency. 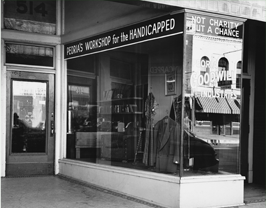 Goodwill Industries of Central Illinois, Inc. began operations in Peoria in 1934 during the height of the depression. The unemployment rate at this time was 50 percent. Goodwill Industries immediately began to provide work experience and training to area citizens, fulfilling its mission.

Joseph Selame, a famous designer of corporate symbols and logos, originally designed the logo that represents the “face” of Goodwill Industries, known as the “Smiling G”, in 1968. It was originally designed for Morgan Memorial Goodwill Industries, Inc. in Boston, Massachusetts. They symbol was designed to last, because the longer it is used, the more its power grows. The “Smiling G” represents both our name and the smiles that come from helping people help themselves. In February of 1968, the Conference of Executives passed a resolution encouraging the adoption of the “Smiling G” symbol, and on March 29, 1968, the GII Board of Directors officially adopted the logo.