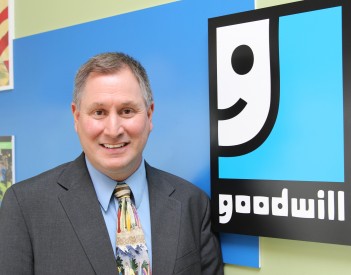 Peoria, IL – April 26, 2016 – Goodwill Industries of Central Illinois’ Board of Directors has announced the appointment of Don E. Johnson as the non-profit’s new President & CEO, replacing Patty Fuchs who will retire in May 2016 after 23 years with the organization.

Johnson has worked in the non-profit sector for more than 26 years. For the past 11 years he has served as the Vice President Community Investments at Heart of Illinois United Way.  In this position he created new policies and procedures to move community-funded projects to an outcome-based system.  He helped build a robust volunteer system of more than 130 people annually, developed from the business community.  Johnson implemented three new community initiatives: 211, Success by Six and S3 (Supporting Student Access).

Prior to the United Way, Johnson was Executive Director of the Hult Center for Healthy Living.  In this position he nearly tripled the operating budget and helped to complete the original capital campaign.  During his time at Hult Center he served on two national boards in Baltimore and Milwaukee.  During his tenure, the Hult Center was ranked number one in publicized research out of 38 similar facilities in the United States.

Joe Sharpe, Goodwill of Central Illinois Board Chairman, commented, “After a comprehensive search process, the board has found the best person to build upon the accomplishments of current Goodwill President & CEO, Patty Fuchs. Don is an excellent leader in our community with a strong passion for helping others. This, combined with his business acumen and the ability to effectively communicate and execute strategic plans, makes Don uniquely qualified to lead Goodwill of Central Illinois successfully into the future. “

Michael Stephan, President of the Heart of Illinois United Way said, “For the last decade, Don Johnson has done a remarkable job serving our United Way as Vice President Community Investments. During his time at HOIUW, Don was instrumental in developing and implementing an outcome-based grant process to demonstrate accountability and tangible results to our donors. Very few people match Don’s unwavering integrity, compassion, and honest concern for helping others in our community.”

Don will begin his position at Goodwill Industries of Central Illinois, on June 1, 2016.